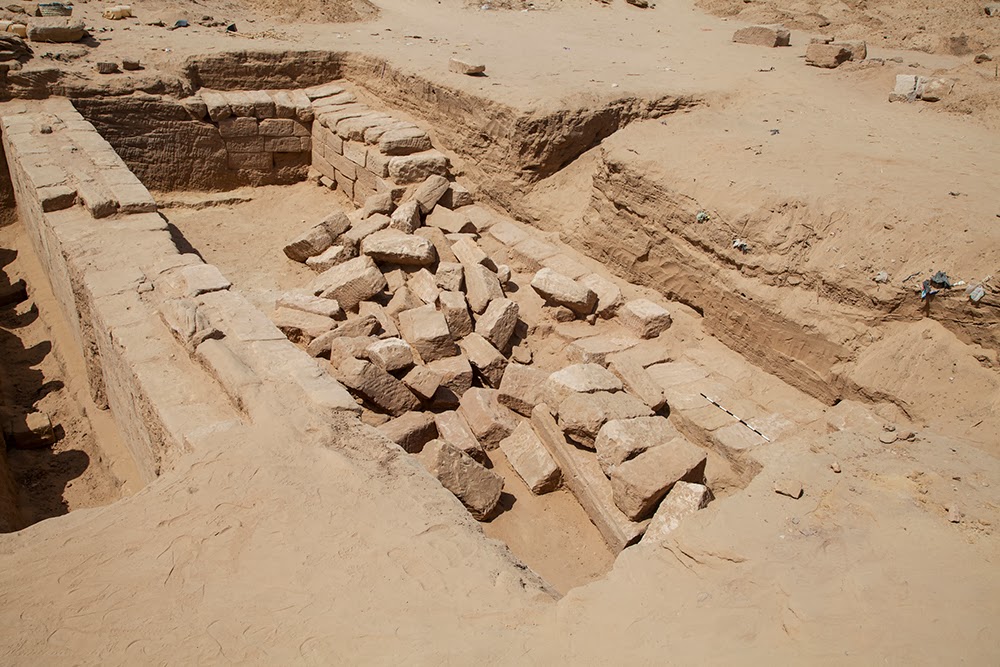 I’ve encouraged the team to write guest-blog posts too. Here’s a note from our geologist/geophysicist, Dr. Carola Stearns, along with a photo of the area she’s working in—the mortuary temple:

The landscape around El Kurru is one of remarkable contrasts: dry vs. wet. We are here in the dry season. The temperatures are slowly rising and the air is very dry. There is absolutely no hint of rain in the atmosphere nor water in the dry wadis (creek beds). Yet in the excavation of the outer room of the temple we uncovered spectacular evidence that a single flood of the adjacent wadi was powerful enough to breach a large section of the outer wall of large, cut sandstone blocks. This must have happened shortly after the original inhabitants abandoned the site. Over time the outer rooms of the temple were filled with almost 2 meters of wadi sediments. Flooding last year deposited sediments all the way into the interior rooms of the temple.

We are situated on the southern edge Nubian plateau where all that remains of formerly extensive outcrops of Cretaceous-aged fluvial  (riverine) sandstones, conglomerates and siltstones are occasional small jebels (mesas). These are small erosional remnants in a landscape in which water has played a strong role in the past. Although erosion is continuing today, the pace of the denudation has slowed considerably. Most of the scenery is an unvegetated, slightly undulating bedrock surface with a thin veneer of gravel and, in places, windblown sand. Just north of the village, a petrified forest crops out. Large (> 2 foot) diameter trees felled and then were buried in sediments and then turned to stone by percolating silica-rich waters. Today, the only vegetation is the palm trees and crops in the irrigated lands adjacent to the Nile. It is a sharp contrast to imagine the lush, forested floodplains of the Cretaceous rivers in the same location of the barren desert landscapes of today.
Posted by Geoff Emberling at 2:11 AM