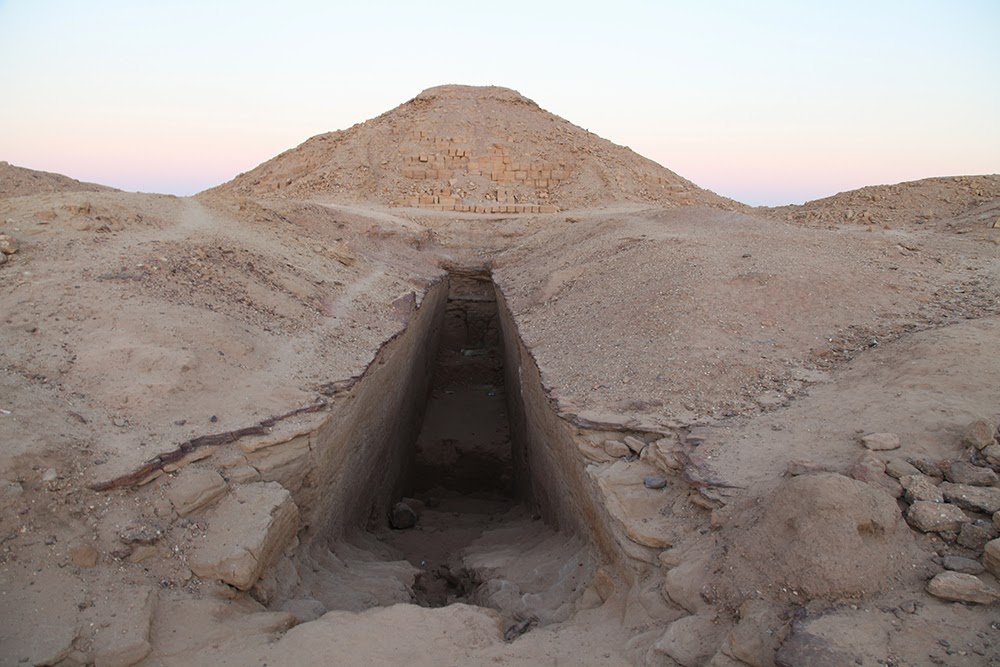 We’re digging a royal pyramid burial this year! There’s nothing that can prepare you for the feeling of digging something this big.

This particular pyramid is one of the largest in Sudan. It must have been built by a powerful king, but we don’t know which one—it might even be a king that we know nothing about.

The pyramid itself is almost 90 feet on a side (26.65 m, to be precise) and it’s now over 30 feet high. Even more impressive, the staircase leading down to the burial chambers is cut through solid rock to a depth of about 25 feet.

The staircase and outer chamber of the pyramid were excavated by George Reisner when we worked at the site in 1919, but the second chamber was blocked by a large rockfall. Reisner got in that far, looked up and realized he could see the base of the pyramid, and decided to “consider the situation” (as his notebook says). He evidently decided there was no way to clear the burial chamber safely, so he didn’t excavate that chamber or a possible 3rd chamber.

A Spanish architect, Ignacio Forcadell, who has worked to support rock-cut tombs in Egypt, is joining us in a week and will work to devise supports that will make it possible for us to remove the fallen stones safely. In the meantime, the National Geographic film crew that will arrive in March is hoping to bring robots with cameras attached that will give us a look behind the rockfall and help us prepare to remove it.

Although all the royal tombs of ancient Kush found so far were looted in antiquity, we can hope that this rockfall has either made it impossible for looters to get into the tomb, or perhaps has “protected” part of the burial offerings by falling on top of them. We hope to find out either way!
Posted by Geoff Emberling at 11:38 PM