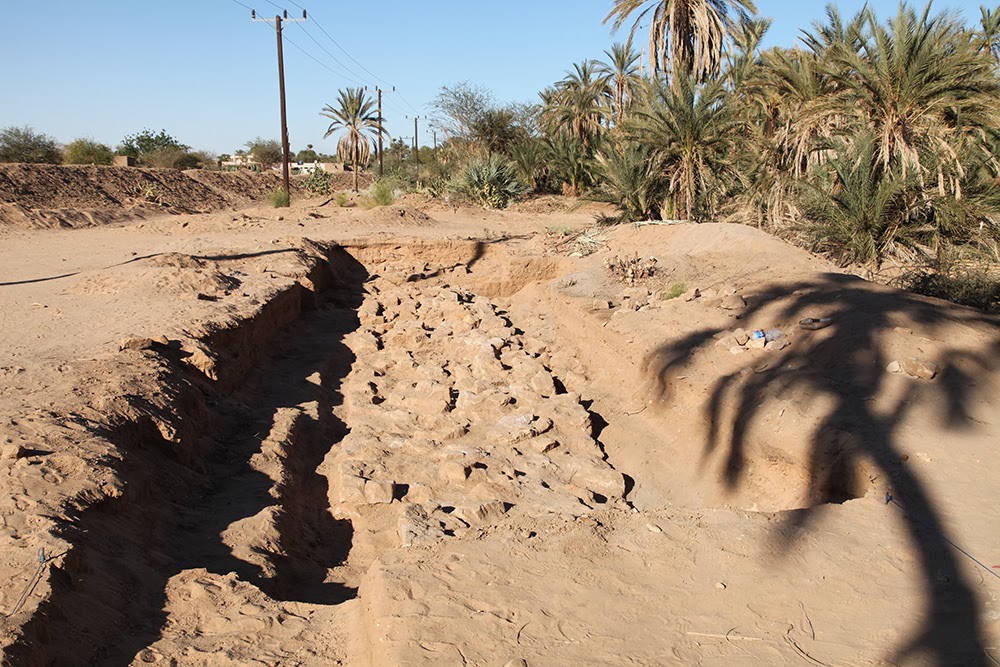 One of our three areas for excavation this year has been a city wall discovered by Reisner (but like all his settlement finds, never published). His notes say that it was 200 meters long with a gate in the middle of it. We thought we had found it last year, and we’ve been delighted this season to find that it really is the wall described by Reisner.

This is not the world’s best photo of our wall (although I do like the shadow from the dom-palm tree), but it shows a stretch of about 15 meters of a stone wall that is more than 2 meters wide. We have just exposed the top, but we know that it is preserved about a meter high. And we have just discovered the gateway—photos of that to come (we are still working to excavate and clean it).

Of course the wall is not as simple as Reisner’s plan suggested. There seem to be some walls extending toward the river from our main wall, which would be strange for a fortification wall unless they were towers or bastions. And as we found last season, most of the pottery associated with the wall is Christian period in date (about 9th century AD) when we would expect from the wall construction that it would be Napatan or Meroitic (say 5th century BC). We think the wall may have been used in both periods, but it will take further excavation to find out.

The wall is important for its own sake, but also for what it tells us about the location of a possible settlement around the royal cemetery of El Kurru.
Posted by Geoff Emberling at 2:28 AM